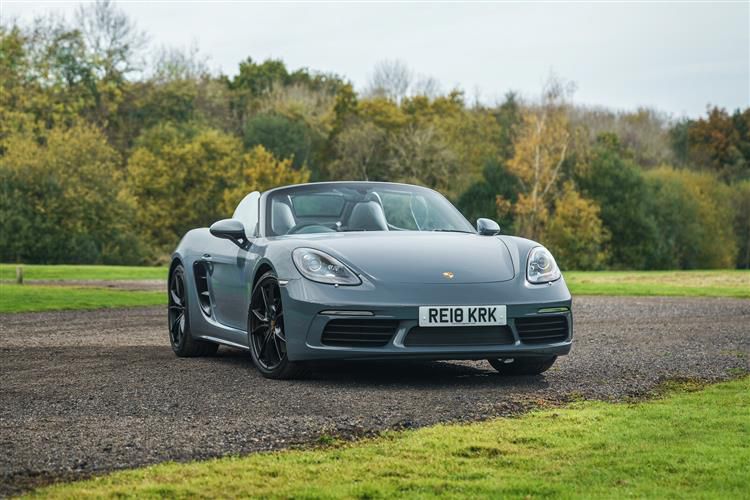 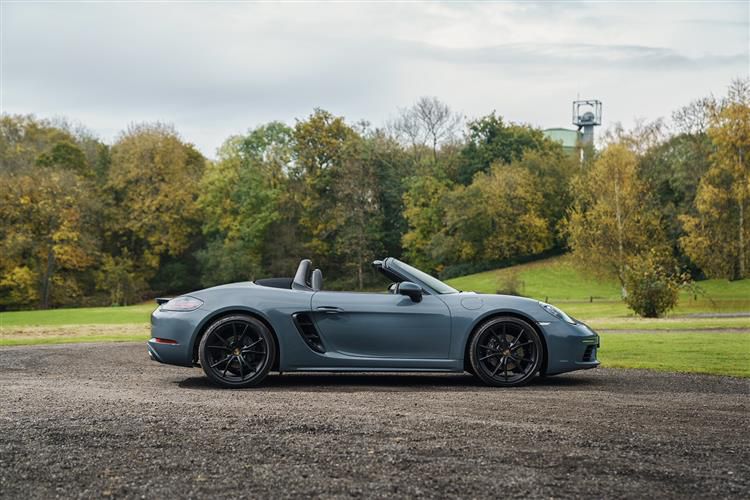 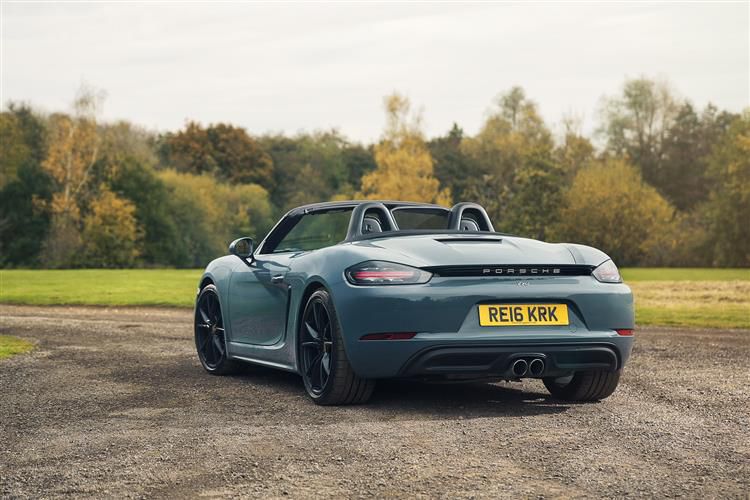 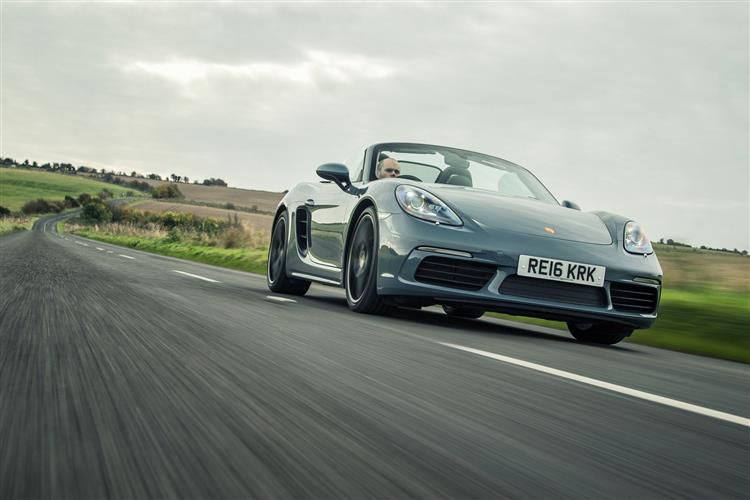 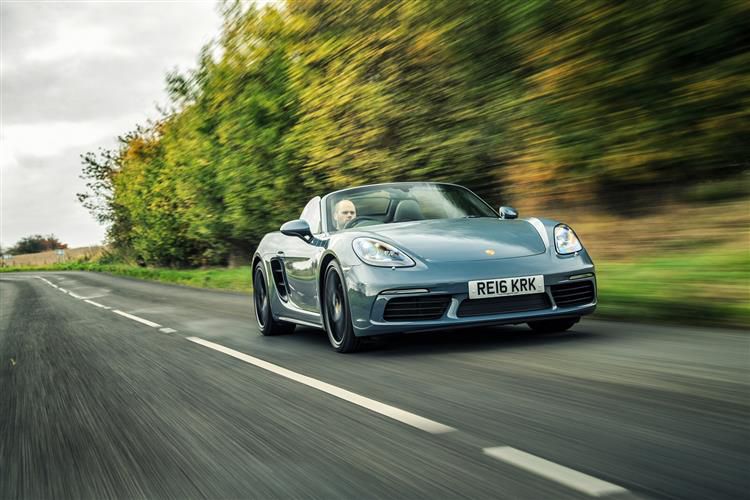 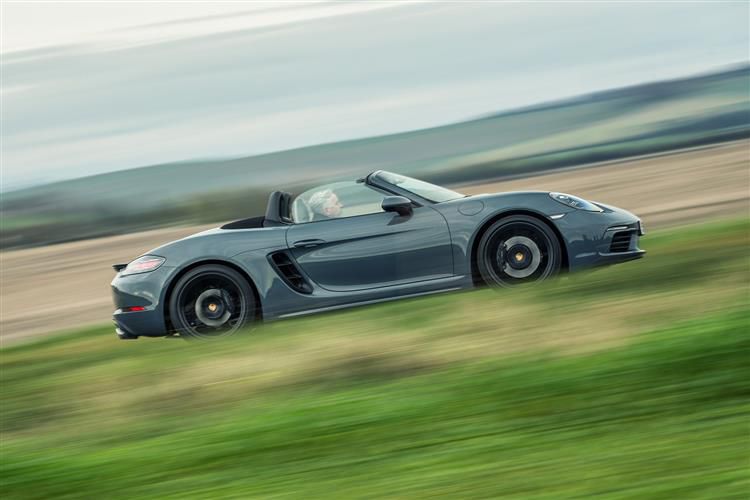 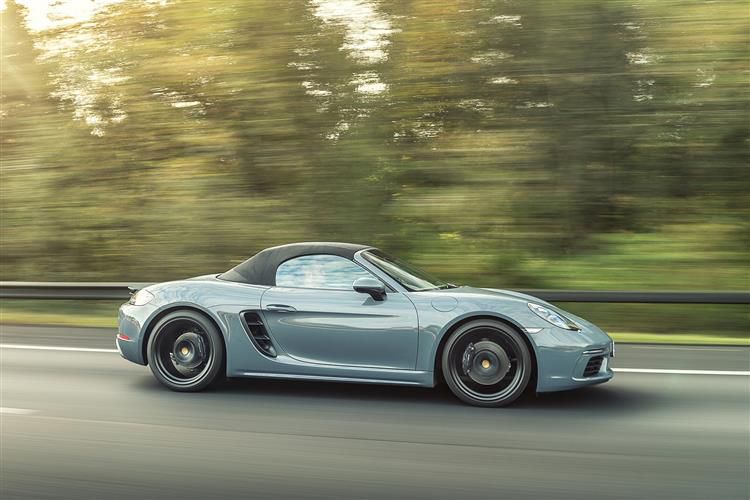 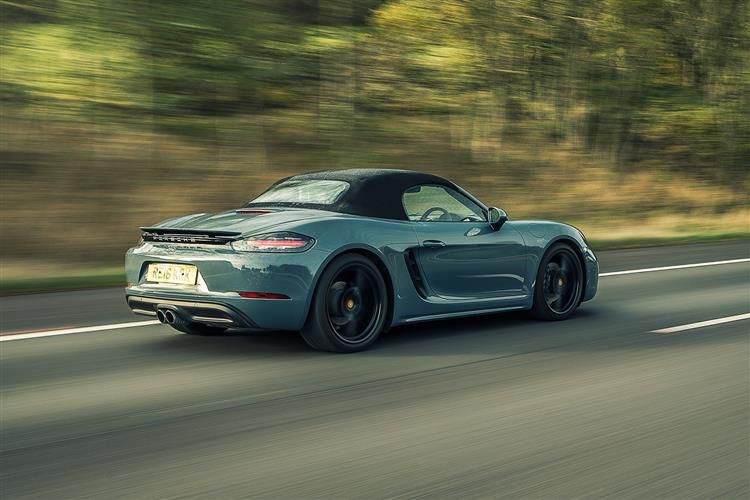 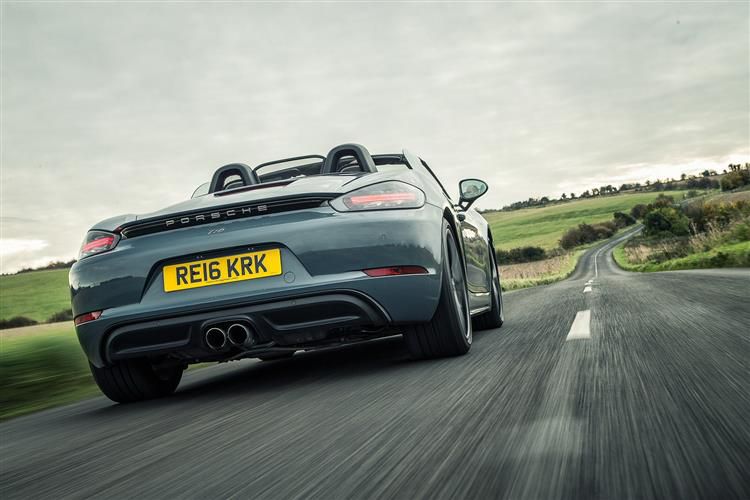 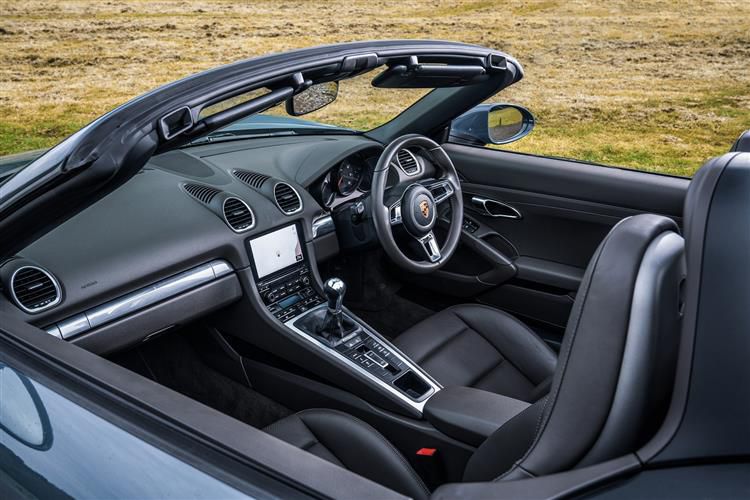 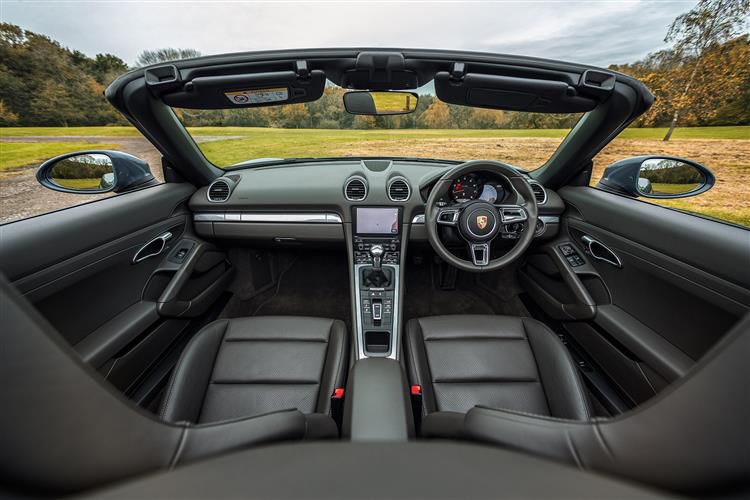 Porsche's redoubtable roadster is back, better than ever in turbocharged form. Jonathan Crouch looks at what's on offer from the 718 Boxster.

The Porsche Boxster has long been the benchmark in the sports roadster sector - and still is in this latest turbocharged '718 Boxster' guise. It's more powerful, more efficient, sharper to drive and better looking. What's not to like?

How do you begin to design an even better Porsche Boxster? Think about the restrictions placed upon you, were you to be tasked with the job. It would need to be better to drive than any of its key rivals, yet it would also need to wriggle into a price bracket that slotted it between sports roadsters and the latest Porsche 911 models. It would need to appeal to the German intent on thrashing it around the Nurburgring, the Floridian retiree with a golf bag in the boot and those inching through the Beijing rush hour. As with any successor model, it would need to pull off the trick of being better built but lighter, quicker yet more economical and offering more equipment while issuing fewer tailpipe emissions. That's one heck of a balancing trick. Thing is, Porsche looks as if it has pulled it off with this 718 Boxster model. The '718' reference in the name refers not to the engine but a series of classic Porsche mid-engined models that won numerous races in the 1950s and '60s.

The Porsche Boxster's reputation as a driver's car has been burnished with each successive generation and this improved third generation variant appears to offer a useful step forward in this '718' form. Much has changed on the engine front. The entry level unit has been downsized to a 2.0-litre unit, but thanks to the addition of turbocharging, the good news is that it generates 35bhp more than the old 2.7-litre lump, managing a hearty 300bhp, which is much more than the original Boxster S. The new '718 Boxster S' offers a 2.5-litre capacity (down from 3.4) but the powerplant is now good for 350bhp (up from 315bhp). A six-speed manual is fitted as standard, although the optional seven-speed PDK double clutch gearbox is sure to be popular. This gets revised software for quicker and smoother shifts. With the optional PDK gearbox, this improved '718 Boxster' will hit 62mph in a claimed 4.7s (nearly a second quicker than before and quicker than the old Boxster S), with the '718 Boxster S' managing to knock over the benchmark sprint in just 4.2s. Handling-wise, the re-tuned chassis enhances cornering performance and the electro-mechanical power steering system is configured to be 10% more direct. 'Porsche Active Suspension Management' is an option and 'S' buyers can specify an even more focused 'Sport Chassis'. Plus there's the usual 'Sport Chrono Package' option with its various selectable driving mode settings that now include a 'Sport Response' button for brief extra engine responsiveness when you need it.

The 718 Boxster has small but subtle differences over its predecessor, the front featuring a wider and more purposeful appearance, with larger cooling air intakes referencing the new turbocharged engine beating within. The nose is completed by restyled Bi-Xenon headlights with integrated LED daytime running lights. In profile, identifying features include independently-styled wheel arches and side sills. Larger air inlet panels with two fins further emphasise the car's dynamic look. The doors are now designed without door handle recess covers. The rear of the 718 Boxster has been redesigned, characterized by a much wider appearance - emphasized by the accent strip with its integrated 'Porsche' badge between the tail lights. The tail lights have been restyled too and are distinguished by three-dimensional LED technology and four-point brake lights. Build quality looks better than ever from this car, these days built entirely in-house at Zuffenhausen rather than being contracted out to Valmet in Finland as many early Boxsters were. The key interior styling feature is a gently angled centre stack that houses many of the minor controls and the gear shifter, reminiscent in design to that found on the iconic Carrera GT supercar. The lightweight fully electric hood dispenses with a compartment lid for the convertible top when stowed.

Where before you could buy a new Boxster for significantly under £40,000, these days, that's no longer possible. This '718' model starts at around £42,000 in 2.0-litre turbo form - or around £51,000 in 2.5-litre turbo 'S' guise. The Boxster features 19" alloy wheels, auto stop/start and sports mode, remote control hood operation, audio CD with colour touch-screen control, a universal audio interface offering MP3 connectivity and a three year warranty. A central feature of the new interior is Porsche Communication Management (PCM) with mobile phone preparation, audio interfaces and the Sound Package Plus with 110 watts of audio power. PCM can be extended with optional modules to thoroughly adapt it to personal requirements. For instance, the navigation module including voice control is available, which makes it easy to input driving destinations. In addition, the Connect Plus module is available as an extension of the navigation module; it provides online navigation services and enhanced online audio features. With Porsche Vehicle Tracking System Plus (PVTS+) as standard, the 718 Boxster offers the highest class of vehicle security. All new Boxster customers also get the opportunity to explore the potential of their car by participating in a complimentary course at the Porsche Experience Centre, Silverstone. It's hard to imagine a more enjoyable day you could spend with your new toy.

Porsche has carved an enviable reputation when it comes to the efficiency of its sports models and the '718 Boxster' continues to show other manufacturers the way forward. The launch of the 718 Boxster represents a return by the brand to building sports cars with flat four-cylinder 'boxer' engines. The addition of a turbocharger significantly boosts torque while improving fuel economy. In the 718 Boxster, the four-cylinder flat engine with PDK has a Combined fuel consumption figure of 40.9 mpg (5.1 mpg more than the previous model). In the 718 Boxster S, the 2.5-litre turbo engine with PDK returns 38.7 mpg Combined (4.3 mpg more than the previous model). CO2 emissions vary across the range from 158 to 184g/km. Each 718 model is equipped with a six-speed manual transmission as standard. The Porsche Doppelkupplung (PDK) auto transmission, which now features fuel-saving 'virtual gears' previously introduced on the 911 model series, is available as an option. The PDK transmission features a 'sailing' mode whereby the engine is decoupled during periods of trailing throttle or on longer downhill sections, dropping the engine revs to a mere 700rpm, further saving fuel. Prod the throttle and it will instantly resume duty. Residual values have held up reasonably well on the last Boxster and there's no reason to believe that this model won't follow suit.

It's hard to countenance now, but the Boxster wasn't an instant hit for Porsche. Many saw the original 204bhp 2.5-litre car as being an overly watered-down facsimile of what a proper Porsche should be. How times have changed. As the mainstream 911 model and its market has matured, the Boxster, and its sibling coupe model, the Cayman, has increasingly come to definitively represent the essence the company's know how for a new generation of buyers. This latest '718 Boxster' model only underscores that fact - to the extent that many buyers will question why you'd pay a big premium for an open topped 911. The marginal benefit of a vestigial pair of rear seats? Horses for courses you may rightly say, none of which detracts from the fact that Porsche has excelled itself in improving this latest Boxster. The last model bowed out while still comfortably at the top of its game with rivals scratching around for ways to get close. I have a suspicion that it'll be a similar story when this version finally gets pensioned off. 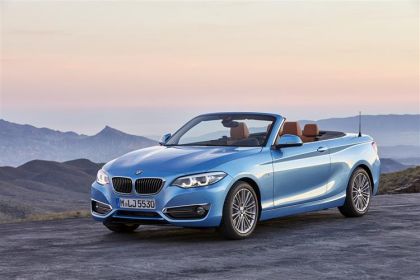 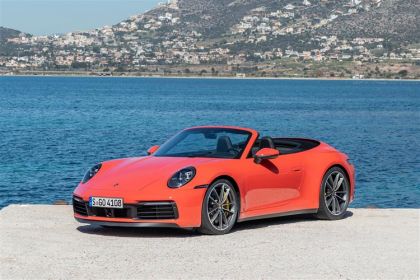