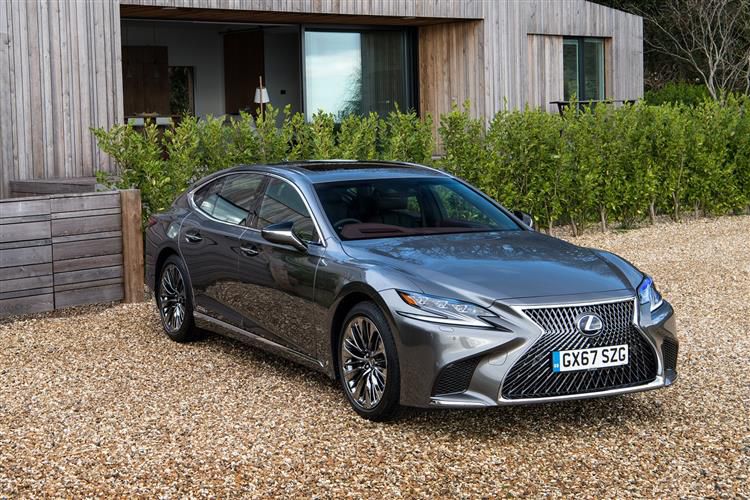 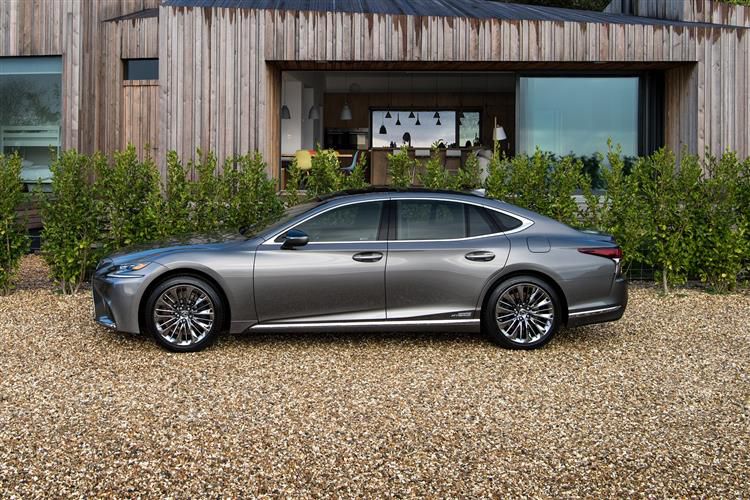 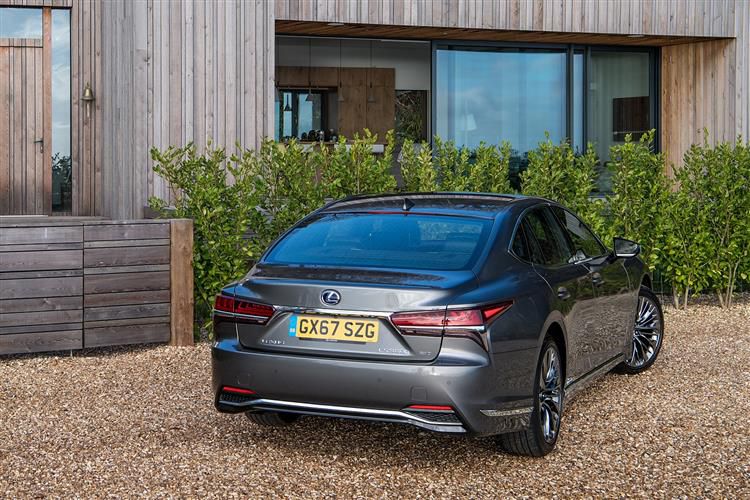 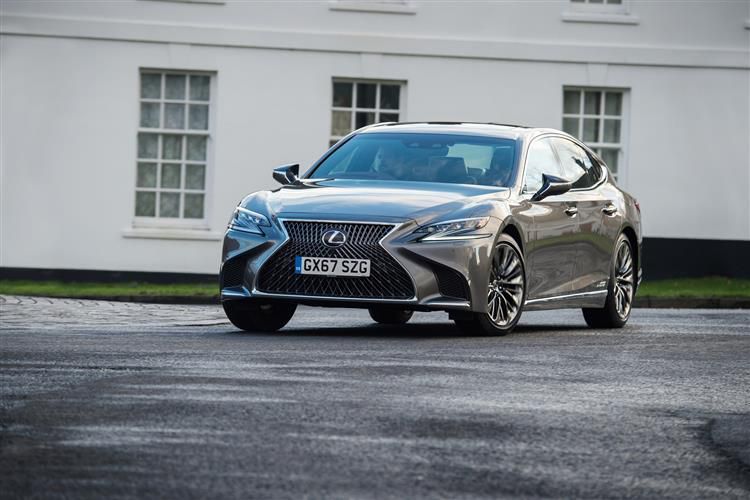 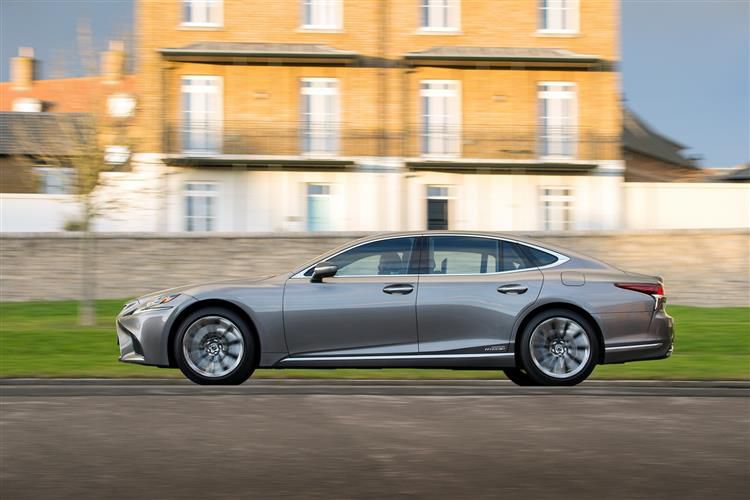 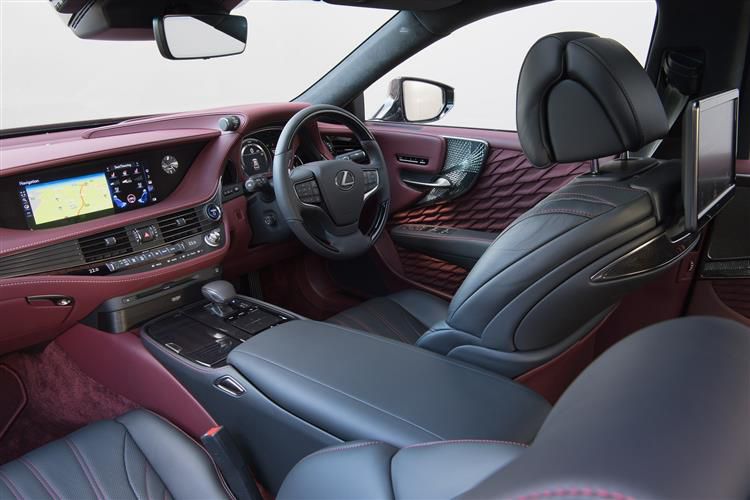 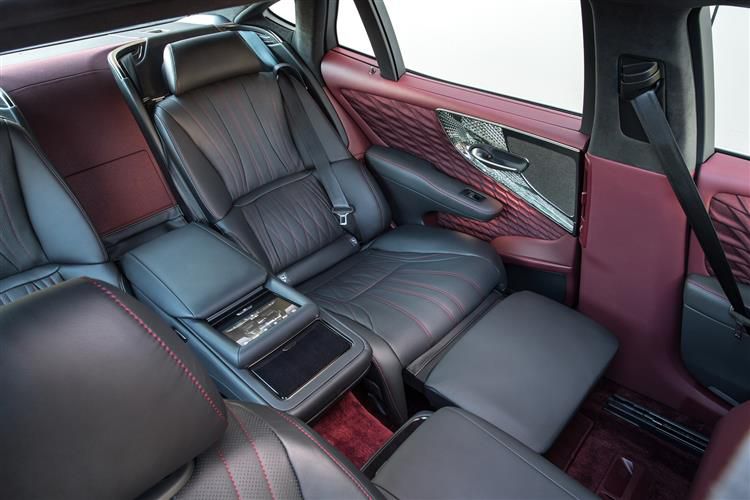 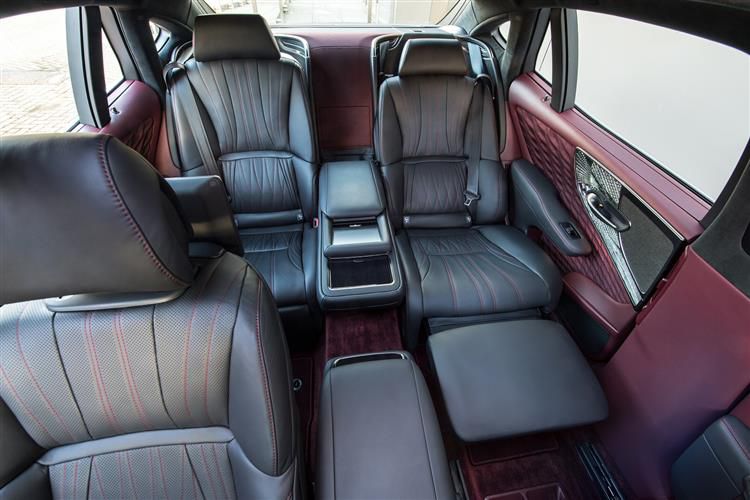 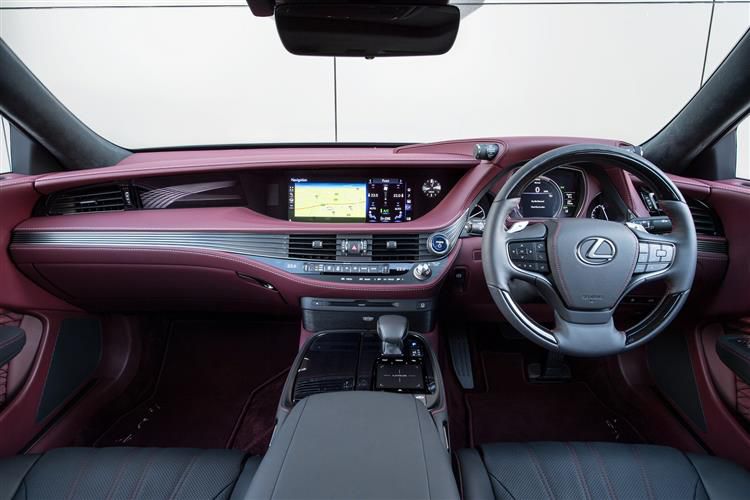 The ultimate Lexus is this one, the LS luxury saloon. This comes only in LS 500h hybrid form these days and it'll be a rare sight on our roads. Jonathan Crouch takes a look at what's on offer.

With this fifth generation version of its large luxury saloon, the LS, Lexus looks to showcase all it can be. This time round, there's a non-Plug-in hybrid petrol 3.5-litre V6 beneath the bonnet and the option of AWD if you want it. What hasn't changed is that luxury, refinement and sheer attention to detail still get top billing.

The Lexus LS. Back in 1989, the launch of the original version of this model redefined what a luxury saloon should be, the engineers behind it tasked to create nothing less than 'the best luxury car in the world'. Few would argue that they succeeded. It seems rather ridiculous now to remember that back then, the European makers who ruled the flagship four-door market sector defined luxury as being as much about wood and leather as it was about ride and refinement. Thanks to this Japanese brand, cars of this kind were finally transformed from boardroom barges to the technological showcases buyers had a right to expect from their inflated price tags. Today, the LS is still a technological showcase, but it isn't the obvious segment choice that it was for a brief period in the early Nineties until the European opposition caught up. The engineers have been working on that though, the result being the fifth generation version we're going to look at here, a boardroom segment full-Luxury saloon that claims to break new ground in design, technology and performance, and extending the boundaries of automotive luxury. That's quite a claim when other rivals in this segment include contenders as accomplished as the Mercedes S-Class, the BMW 7 Series and the Audi A8.

Only one engine is offered, the normally aspirated 3.5-litre petrol V6 fitted to the single LS500h model, which puts out 295bhp but is boosted by a hybrid system to produce a 'total system output' of 354bhp. This package powers the rear wheels in most models which are suspended at each corner by multi-link suspension units. There's also an AWD version available for those wanting it. In other markets, this powerplant comes fitted with twin turbochargers; unfortunately, we don't get that version here, which means that the engine has quite a job on shifting nearly 2.5-tonnes of Oriental real estate. Still, 62mph from rest is dispatched on just 5.4s in the rear-driven variants, en route to a top speed that as usual in cars of this kind is artificially restricted at 155mph. As for handling, well the LS has, to be frank, never previously been a very rewarding thing to drive, something that historically hasn't mattered to the core customer base of lazy Americans and retired Europeans. But Lexus needs to reach out beyond these people, particularly in the British market. Has it done so here? Not really, though buyers do get a 'Drive Mode Select' system that sharpens steering feel and reduces body roll.

Lexus has moved from the 'three-box' saloon look of previous LS models to a design that presents a sleeker, more coupe-like silhouette. A shoulder line running from front to rear expresses the low centre of gravity and the new 'GA-L' platform this car now sits upon (shared with the LC coupe) has allowed the LS's height to be reduced by 15mm, with the bonnet and boot lowered even further. The frontal design makes a bolder statement this time round, emphasised as usual by the trademark Lexus 'spindle'-style front grille which is flanked by ultra-compact, triple bi-LED headlights. As you move towards the car, the door handles illuminate, spotlights appear beneath the mirrors. When you get in, the seatbelt presents itself and its holder even extends by 50mm to receive the buckle. Lovely. There's a 20 or 28-way-adjustable seat trimmed in exquisite leather which incorporated a range of massage functions from 'stretch' to 'Shiatsu'. Not so nice is the retention of the rather fiddly mouse mat-based Lexus infotainment system, which takes some getting used to, despite recent improvements. The rear compartment is equally nicely trimmed, though we were surprised that there wasn't more headspace. Less surprising (given that this is a hybrid) is the relatively modest levels of bootspace - the quoted figure is 430-litres.

Rarity will be a major draw for likely buyers, with just 100 LS models likely to find buyers here each year. To put that into perspective, the segment-leading Mercedes S-Class sells about 2,500 units in this country every year, with rival BMW 7 Series and Tesla Model S contenders selling around 2,000 units annually. Even Porsche's more exclusive Panamera usually breaks into four figures. All this being the case, we were a little surprised to find such a wide range of trim variants offered to UK Lexus LS buyers, all based around the '500h' Multi Stage hybrid engine package. There's an entry-level model priced at around £73,000, but most customers will want to find the £80,000 budget that'll get them either dynamic 'F Sport' trim or the more comfort-orientated 'Luxury' spec. If the 'Luxury' variant suits, you'll also be offered the £2,600 option of AWD. Around 45% of buyers go the whole hog and buy in right at the top of the range with this 'Premier'-spec model, which comes only with AWD and a £98,000 price tag. This is the version you'll need for the exclusive 'Pleat' equipment pack that, for around £7,600 more, gives you a beautifully distinctive hand-pleated finish for the leather upholstery and unique Kiriko ornamental glass in the door panels.

Ultimately, you don't buy a huge V6 petrol-powered luxury saloon like this and expect it to be an inexpensive thing to keep on the road. So you might be surprised by this LS500h hybrid model when it comes to questions of running cost efficiency. OK, so it doesn't feature Plug-in technology - Lexus doesn't think that's needed. Even so, an LS500h returns 43.5mpg on the combined cycle and 147g/km of CO2 in rear wheel drive form. Go for the minority-interest AWD version and those figures fall only slightly - to 39.8mpg and 161g/km. The insurance group is a top-of the-shop 50E rating across the range. To maximise your returns, you'll need to make frequent use of the 'Eco' setting in the Drive Mode Select system. This reduces throttle response and engine power output in relation to use of the accelerator pedal to maximise fuel efficiency at the same time as limiting the voltage of the power control unit. The best part of owning a Lexus is that you can be almost certain that nothing will go wrong. Even if such a thing ever happened, so efficient and pleasant are the dealers that you'll be almost glad it did.

The LS is - and has always been - the car its brand is built upon. The day that Lexus can't bring us a credible large luxury saloon to challenge the best of the premium European makers will be a day the company will have taken its eye off the ball with too much of its focus on sports saloons, compact executive hatchbacks and SUVs. This fifth generation LS reassures us that that time is unlikely to ever come. While this isn't a class leader, it's still a desirable and very different class contender in so many ways, primarily when it comes to refinement and cabin luxury in this segment. Driving one of these is an experience, but one that few boardroom buyers will ever get to try. They'll dismiss this car for its lack of diesel power or Plug-in hybrid technology. They'll bemoan the doubtful residual values. Or assume that driving one will be like piloting a waterbed. Which is a pity because for all its faults, this LS is a car that many top executives would really enjoy owning.

per month
Initial rental:
Total price:
Finance Type ()
Business
Personal
Contract length (months)
24
36
48
Initial rental (months)
1
3
6
9
12
Annual mileage
10000 miles per annum
Vehicle maintenance
Yes
No
No - I understand I will be responsible for all scheduled servicing, maintenance & tyres of my vehicle
Yes - I would like my vehicle maintained and serviced throughout the term of the contract