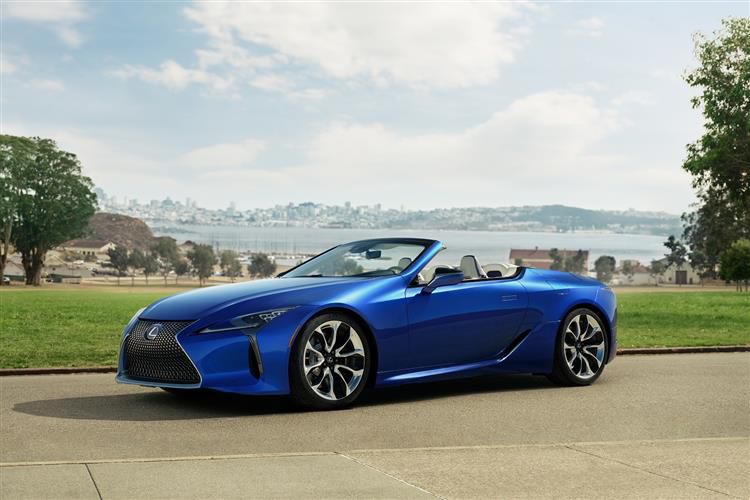 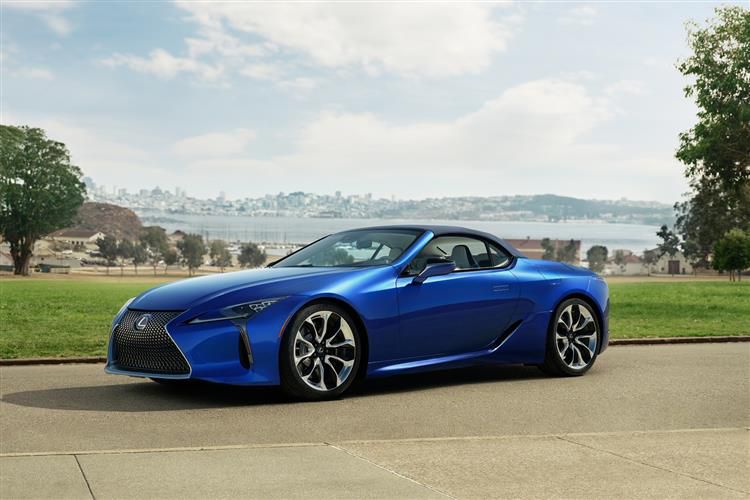 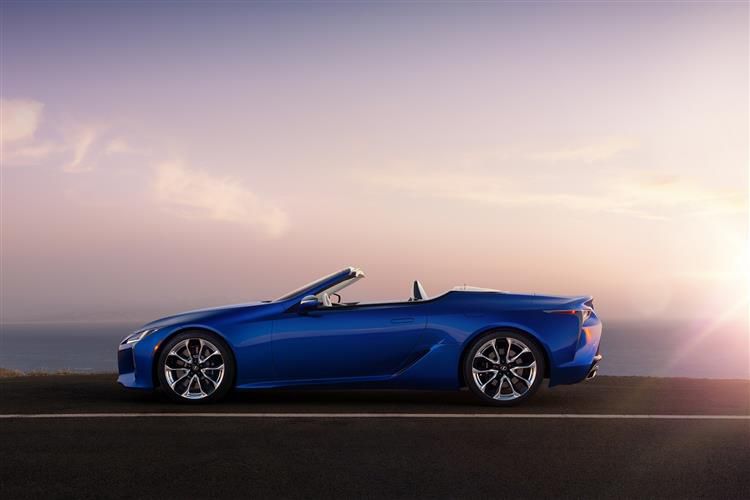 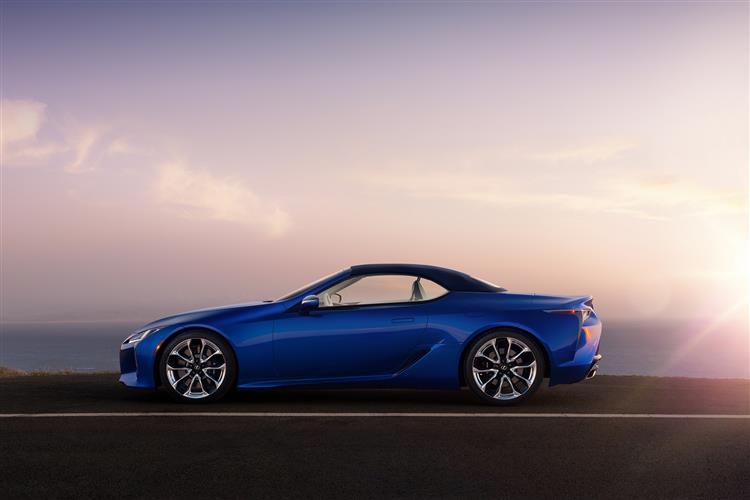 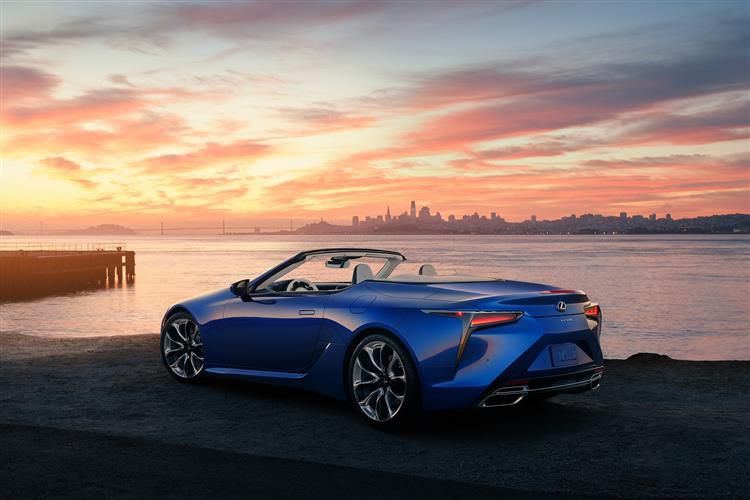 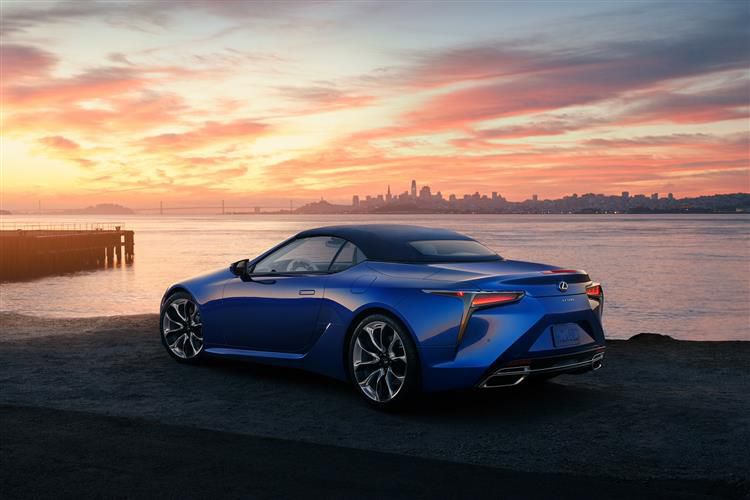 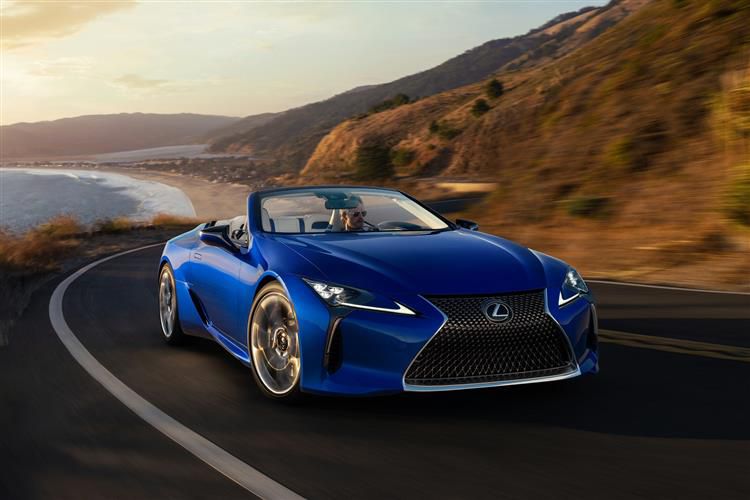 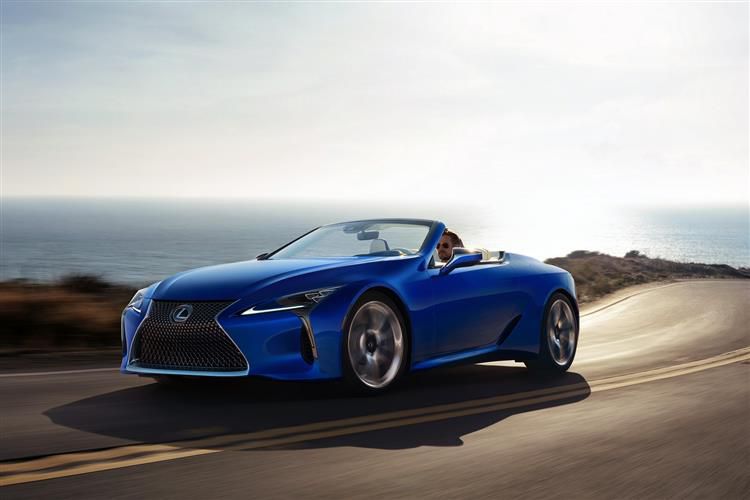 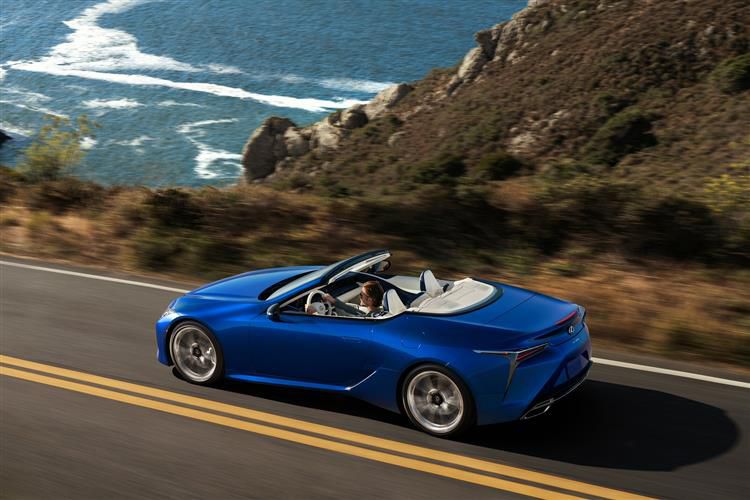 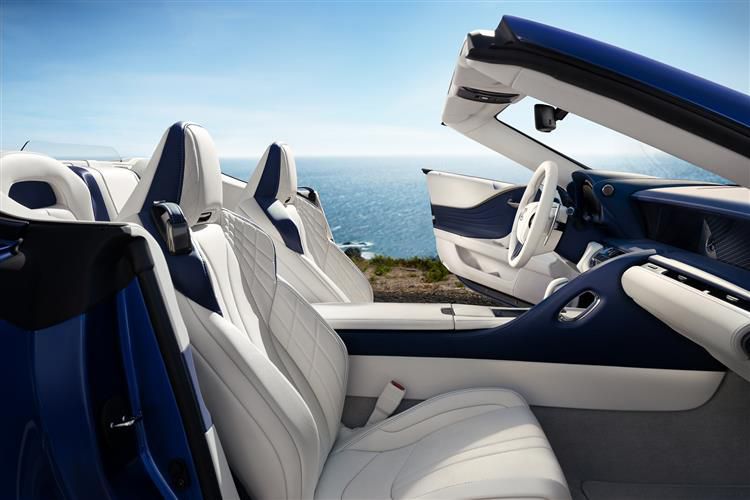 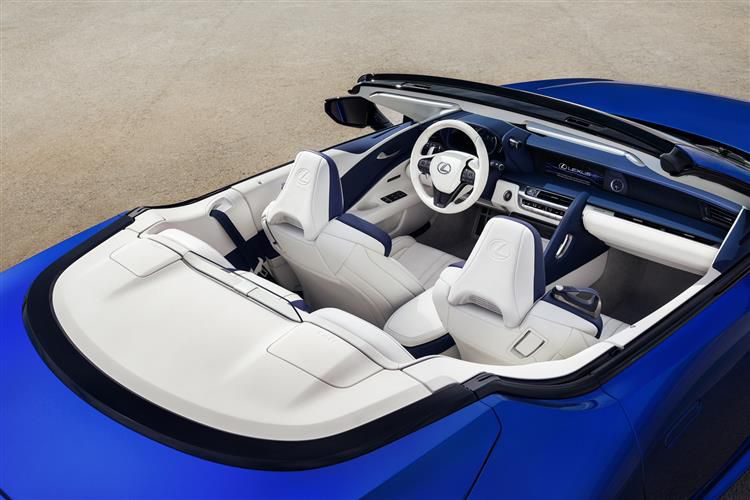 The Lexus LC Convertible offers the potential for a fresh direction for this premium Japanese brand. Jonathan Crouch reports.

The LC Convertible is, says Lexus, "one of the most sought-after vehicles we've produced". It's the first time the brand has properly ventured up towards the three-figure price bracket and to justify that, this open-topped sports car will have to be very desirable indeed. All the signs are that it is. It's come equipped to take on the luxury convertible segment's very top contenders, with drive dynamics that work on the track as well as on the highway. Plus there's styling that'll cause a stir in the High Street and a gorgeous cabin.

"From the moment we finished this car", says Lexus Group Vice President David Christ, "we've been thinking of what comes next. This car signals the future direction of our brand". Clearly then, the LC Convertible is significant - more than just a derivative of the impressive LC Coupe. Like that fixed-top model, it's aimed directly at the BMW 8 Series and the Porsche 911 - and as with those cars, more powerful versions will inevitably follow. If the brand can be successful in this model's more exalted price bracket, Lexus will feel confident about producing super-luxury SUVs and boardroom-level saloons - and much else might open out.

Not long ago, if Lexus had launched a car into this segment, it would have been a direct competitor to the Mercedes S-Class Cabriolet. But it says much for the way that the LC Coupe has changed our perceptions of what this brand's dynamically capable of that we now have no trouble in perceiving this LC Convertible as a rival to far more sporting large luxury soft tops like the BMW 8 Series Convertible and the Porsche 911 Cabriolet. To make sure of that, Lexus has recently updated the LC Coupe with handling tweaks aided by greater use of aluminium parts for the suspension and the adoption of a lighter but higher strength material for the coil springs. While altering the suspension in this way, the engineers took the opportunity to update it with a smoother, softer stroke to give the driver more of a feeling of connection to the road. With the same goal in mind, rear anti-roll bar rigidity was increased to improve turn-in performance and provide more linear steering input. And for sharper cornering, the LC has gained an 'Active Cornering Assist' function, which subtly brakes the inner wheels in line with lateral acceleration experienced when higher G-forces are generated in spirited driving. There have also been subtle software changes to improve feedback from many of the car's systems, primarily those for the Variable Gear Ratio Steering, the Dynamic Rear Steering and the Electric Power Steering. All these changes also feature on this open-topped model. It was launched in LC 500 form with the brand's usual 5.0-litre normally aspirated 457bhp petrol V8. But prospective buyers can also talk to the dealership about an LC 500h hybrid version with the company's equally familiar 3.5-litre V6 petrol hybrid with 354bhp. As with the Coupe model, this electrified version features a clever CVT auto gearbox which essentially offers 10 virtual ratios.

The LC Convertible trades the Coupe model's 'floating' roof line for a sloping fabric roof that flows into a long, flat rear deck. Lexus claims that this convertible top can be opened in only 15 seconds and operated at speeds of up to 31mph. To keep wind buffeting down, there's a transparent wind deflector behind the rear seats. Yes, you get rear seats; there's a 2+2 seating layout that essentially the same as that on the LC Coupe, though rear seat space is slightly compromised by the roof mechanism and its storage compartment, as is boot capacity. At the wheel, you are looked after by seat heaters, neck heaters and a heated steering wheel, all of which are automatically activated depending on the outside temperature and the position of the fabric top. As with all LC models, there's a rotary touchpad-controlled 10.25-inch infotainment screen, a digital instrument binnacle and a premium stereo system. As you'd expect, the materials and finishing are faultless, as is the gadget count. The driver's cockpit has been ergonomically designed to instil confidence and invite spirited driving, with an intuitive layout of the controls and a well-judged seating position. The driver's hip point has been located as close as possible to the coupe's centre of gravity, maximising direct feedback of the vehicle's dynamic performance.

Expect pricing to start at around £90,000 and range up to around £100,000 once you've ideally specified your LC Convertible. There's not much difference in price between the LC 500 V8 and the LC 500h hybrid. All buyers get the Lexus Dynamic Handling system. This set-up aims to provide this LC with a higher level of handling in all driving scenarios, achieved through the co-ordination of the car's Variable Gear Ratio Steering (VGRS), Dynamic Rear Steering (DRS) and Electric Power Steering (EPS) functions. The result is supposed to be ultimate steering response in everyday driving, true to the driver's inputs, with a high feeling of rear tyre grip and instantaneous response in high-speed cornering, giving a greater feeling of security. By equipping the LC with a limited-slip differential, Lexus allows the driver to enjoy secure acceleration while cornering; co-operation between the new Vehicle Stability Control (VSC), DRS and the LSD is designed to counteract over- or understeer to help the car keeps to its intended line while communicating a natural feel to the driver.

You're going to need deep pockets to run an LC 500 V8 model; expect a combined fuel consumption figure of around 26mpg and a CO2 return of over 250g/km. Obviously a better bat in this regard will be the LC 500h hybrid, the variant that the majority of UK buyers will probably choose. Low maintenance requirements have been built into this model's Hybrid Synergy Drive system. As part of this, there's no starter motor or alternator to go wrong, no drive belts to break, a maintenance-free timing chain, no particulate filter to get clogged up with diesel fumes and of course, thanks to the CVT auto gearbox, no clutch either. The Hybrid set-up has a good record for minimising tyre wear and its battery will last the life of the car. Plus the regenerative braking set-up helps extend the life of the brake pads. What else? Are you worried about the complexity of the hybrid system? Don't be. There are over 8 million Toyota-engineered hybrids reliably pounding global roads and the facts are that Hybrid technology generates fewer warranty claims than conventional petrol or diesel engines do. Anyway, the hybrid system gets its own five year warranty and you can choose to further extend this every year in the first decade of ownership, with no limits on total mileage.

The LC Convertible is a logical extension of the Lexus product range but for those fortunate enough to eventually own one, it'll represent anything but a logical purchase decision. This is the kind of car you don't want to have to sensibly justify, a way to reward yourself for decades of toil. Previously, if you wanted such a thing, didn't want a track-tamed roadster-style model and couldn't quite stretch to a convertible from Bentley or Rolls-Royce, something of a compromise was required. Either the luxury of a Mercedes S-Class Cabriolet or BMW 8 Series convertible. Or the sharper handling of a Porsche 911 Cabriolet or Maserati Gran Cabrio. This Lexus has a pretty good stab at providing the best of both worlds. And that makes it very desirable indeed. 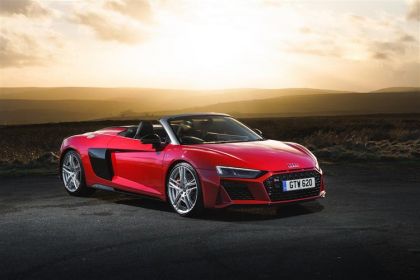 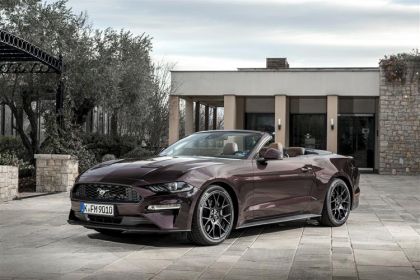 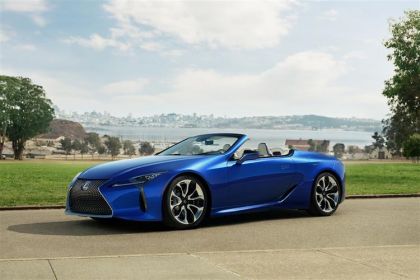