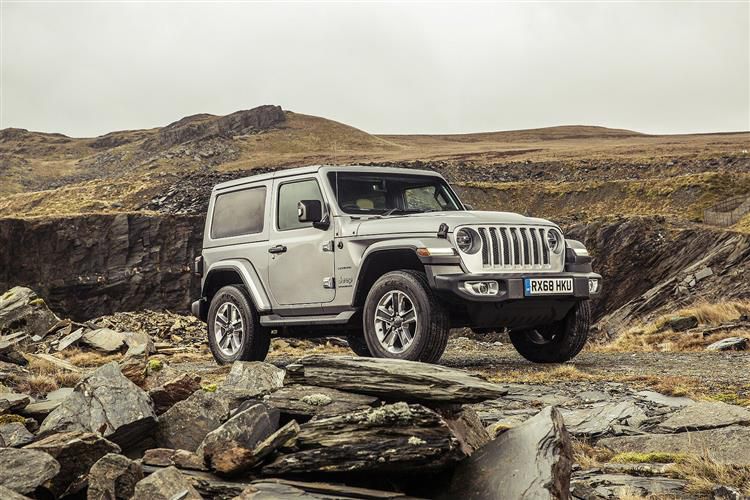 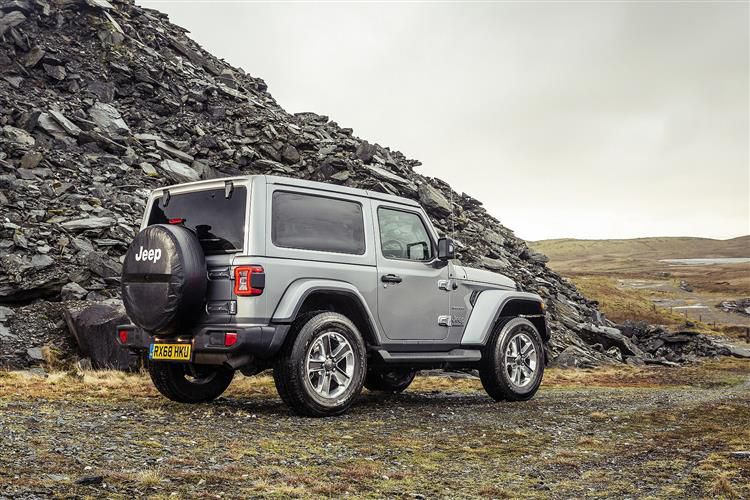 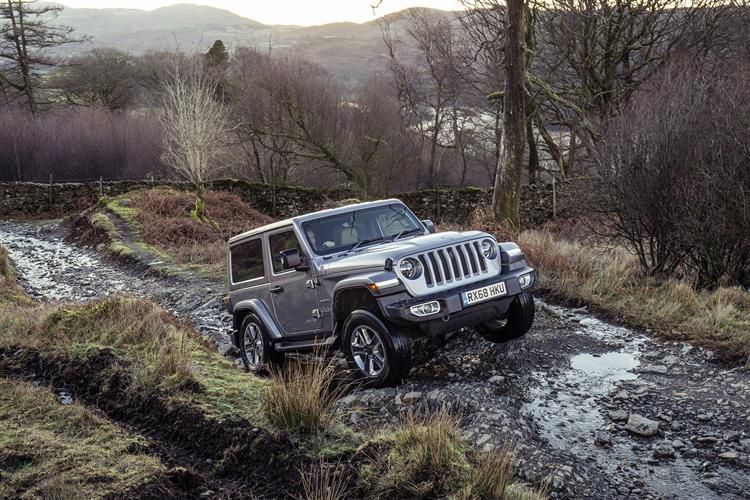 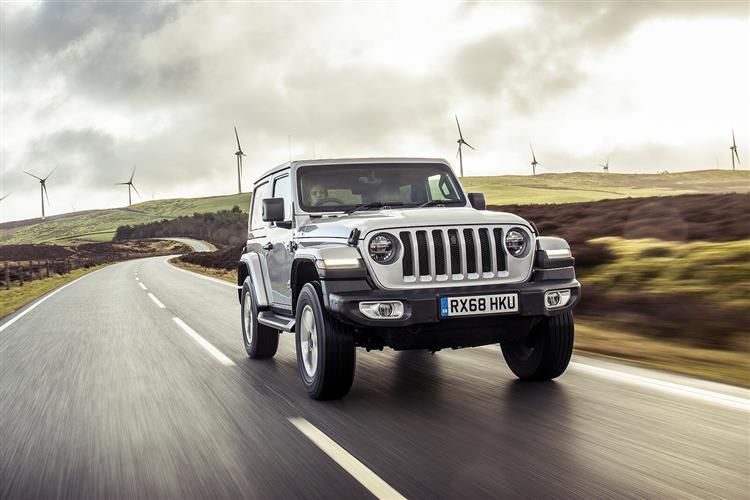 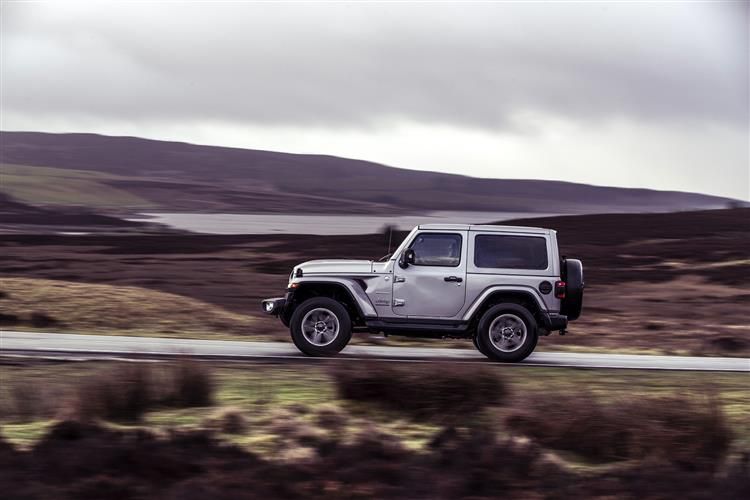 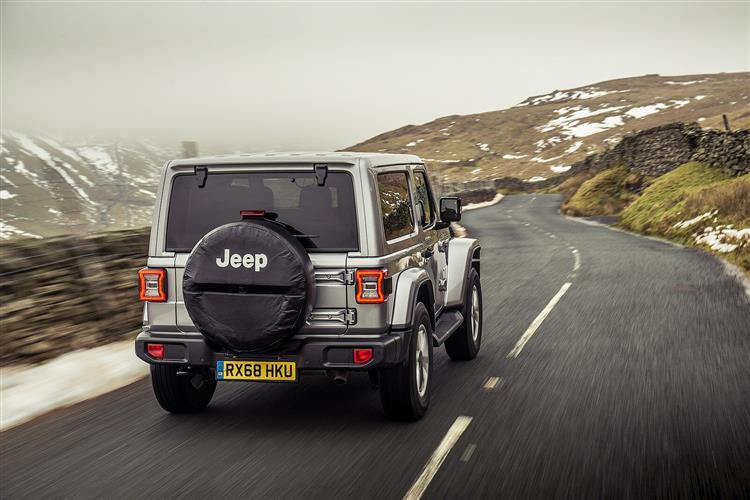 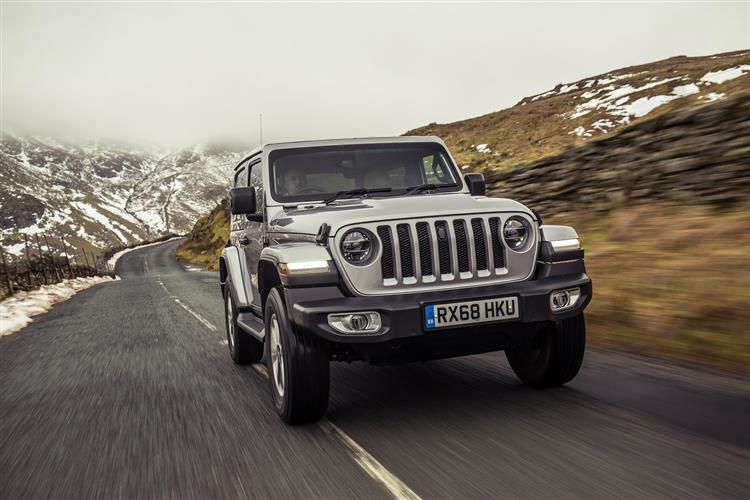 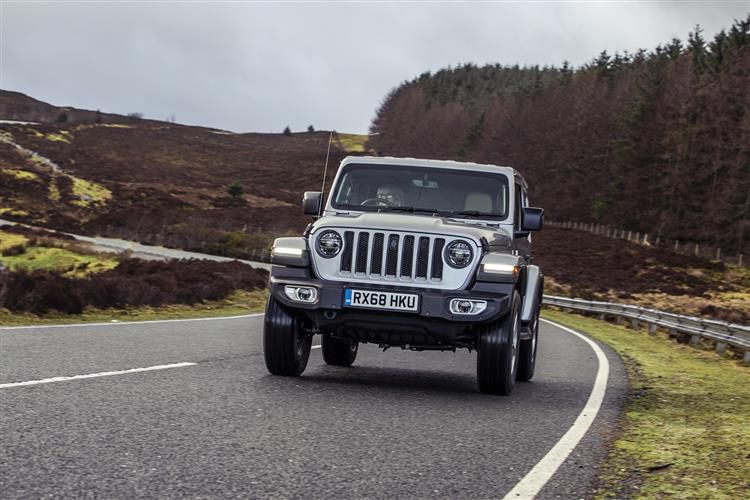 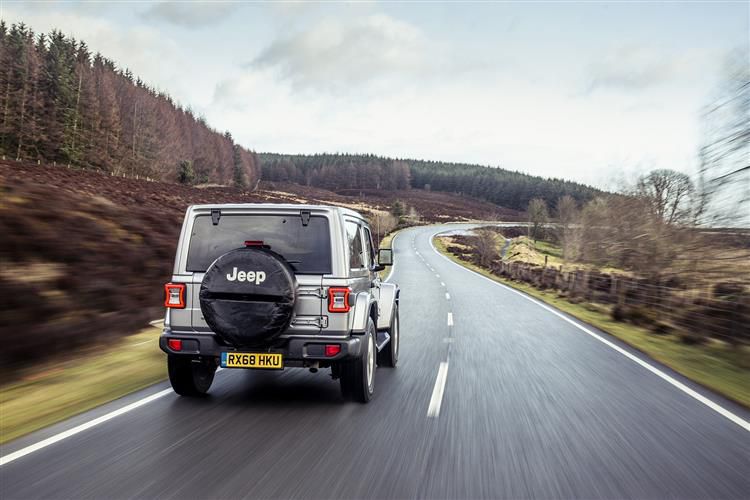 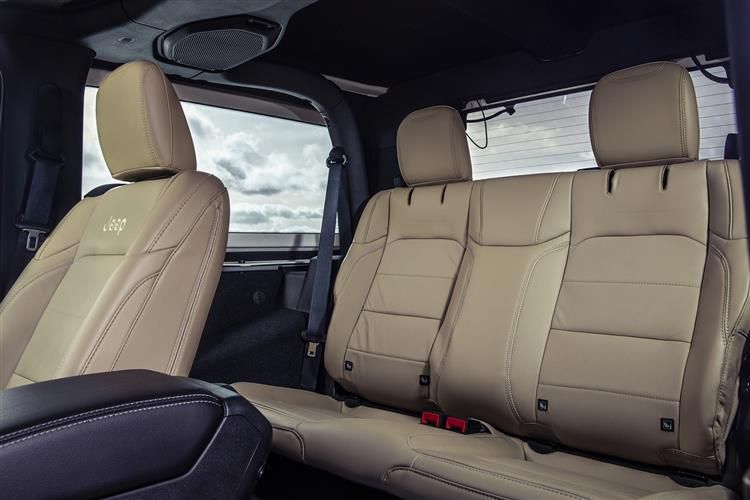 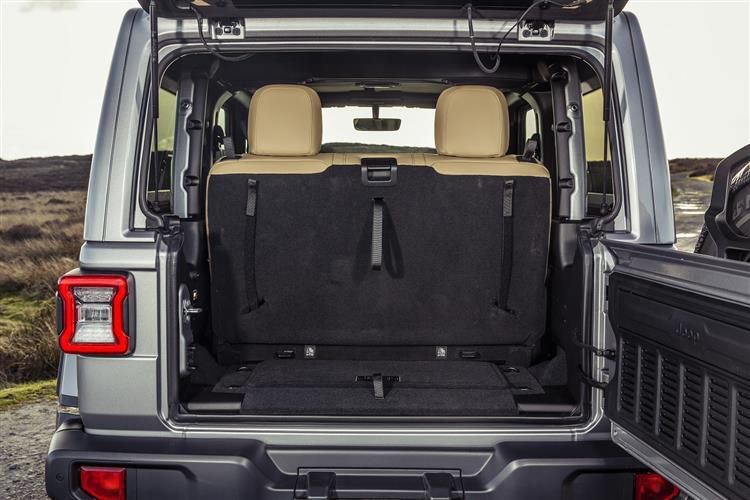 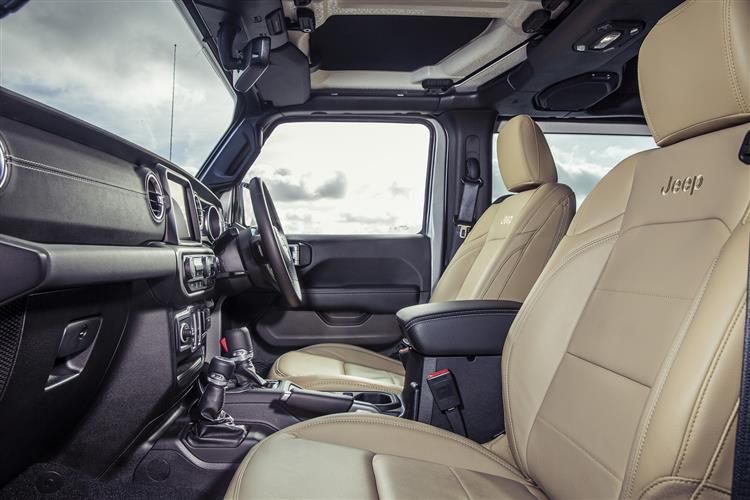 The Jeep Wrangler is one of the most iconic serious SUVs on the planet and has never been a car to shy away from even the toughest off-road conditions. Now, there's a new fourth generation 'JL'-series version, which takes a completely fresh approach beneath the bonnet, introduces modern safety standards and features a redesigned interior. It's still very much a Wrangler though.

A bit of history first. Shortly after the surface of the earth cooled, vertebrates appeared, developed into dinosaurs and then died for reasons still not fully understood. Shortly thereafter, the Willys Jeep was built and spawned countless generations of Wrangler models, first driven by cigar-chomping beefcakes in aviator sunglasses who hadn't realised World War II had ended. Unfortunately, the brand image suffered a terrible knock in the mid Eighties when boy band Bros chose the Wrangler as their vehicle of choice. Bear with me, we're nearly there. Realising that the Wrangler just didn't cut it in an increasingly sophisticated world, Jeep subjected it to major surgery, creating the 'TJ' series model in 1997. This sold until the launch of the 'JK' series design in 2006, which was replaced by the current 'JL'-series fourth generation model in 2018. With the 'JL', the challenge for Jeep was to modernise the vehicle without alienating the hardcore fans of the marque. The first step was to make sure it rode a whole lot better than its predecessor (which wasn't too difficult). Since then, the brand has concentrated on gradually enhancing powertrain refinement and efficiency. Having done so, the company has tweaked the exterior looks, creating the MK4 model we're going to look at here.

Just about the only way we can describe the ride of pre-2007-era Wrangler models to the uninitiated is to imagine being stricken with a rather severe case of haemorrhoids and then being superglued to a spacehopper. Perhaps that's a tad harsh but after the novelty of an old Wrangler's bouncy ride had worn off, you were left with a vehicle that could crawl through deep mud but which wasn't much good at anything else. With the current 'JK' series car, things certainly improved - if not dramatically then, at least, unequivocally. This design is much quieter than its predecessors too, thanks to beefed up insulation from engine and road noise. There's a choice of two engines - a 2.2-litre Multijet II diesel with 200hp and 450Nm of torque. And a 2.0-litre turbo petrol unit with 265hp and 400Nm of torque. Both are mated to 8-speed auto transmission. Sadly, the rorty 3.6-litre V6 Pentastar petrol unit is no longer offered to European markets. There are now two active, on-demand full time 4WD systems - known as 'Command-Trac' and 'Rock-Trac'. These use next-generation Dana axles, Tru-Lock electric front and rear-axle lockers, a Trac-Lok limited-slip differential and an electronic front sway-bar disconnect system. Whichever engine you go for, the Wrangler is still brilliant off road, with its super aggressive approach and departure angles. Opt for the entry-level Sport or Sahara trims and the car comes with clever brake lock differentials. In the two-door short wheelbase line-up, the range-topping Rubicon model gets even more specialist front and rear locking differentials. On road manners feel safe and predictable, if a little slow-witted, but there are decent levels of grip and, on broken or rutted surfaces, the handling is no longer stymied by a bouncy ride.

Changes to this Wrangler's looks include small styling changes to the instantly recognizable keystone-shaped grille, iconic round headlamps and square tail lamps. Plus there are improved aerodynamics and Jeep promises a convenient fold-down windscreen for off-road purists, even more open-air freedom and dozens of different door, top and windscreen combinations. Quite a lot though, hasn't changed at all. The trapezoidal wheel arches, the external door hinges and the rubber bonnet catches are all present and correct, so the Wrangler still looks properly butch. The cabin is pretty spacious in all dimensions and a fold and tumble feature for the rear seat virtually doubles the available cargo capacity, while the curved glass windscreen reduces drag and helps refinement. On the inside, the cabin is actually a lot more car-like that you expect it might be, with decently smart surfaces, a neat instrument panel, plenty of storage areas and an intuitive switchgear layout. Heated, power mirrors are optional and rearward visibility is aided by large rear windows.

The fourth generation Jeep Wrangler is offered in three different trim levels: Sahara, Overland and Rubicon - all available in two or four-door configuration. Pricing starts at just under £45,000 for the two-door models, but most buyers here choose a four-door variant, for which the starting price is about £47,000. Engine-wise, the selection is between a 2.0-litre petrol or a 2.2-litre CRD diesel, priced identically. Either way, you have to have 8-speed auto transmission. As for kit, well even on basic variants, expect to find 16-inch steel wheels, a DVD-compatible stereo with six speakers and remote keyless entry offered as standard. Range topping Rubicon variants will have a '4:1 Rock Trac' part-time four-wheel drive system, electronic front detachable anti roll bars, Tru-Loc front and rear axles and performance suspension. New features this time round include LED headlamps and tail lamps, plus a more sophisticated Uconnect infotainment system with Apple CarPlay, Android Auto and the choice of 5.0, 7.0 or 8.4-inch touchscreens with pinch-and-zoom capability. An array of safety and security systems are also now on offer, including Blind-spot Monitoring with Rear Cross Path detection, a ParkView rear backup camera with dynamic grid lines, electronic stability control (ESC) with electronic roll mitigation and four standard air bags. It makes it sound as if the Wrangler has become gentrified. Don't be fooled. Bottom line? Only buy this car if you're very serious about off-roading. Otherwise you'll merely be wasting your money.

Both the new engines have all the right efficiency kit to offer a big step forward for Wrangler buyers when it comes to CO2 and fuel consumption stats. An engine stop/start system features with both powerplants. The 2.0-litre petrol unit combines the use of a Twin Scroll turbocharger, a new C-EGR system, central direct injection and the independent liquid cooling intake of air, throttle body and turbo, all in a bid to reduce consumption. The 2.2-litre diesel meanwhile, features a multiway EGR system, with LP EGR and HP EGR, both cooled. In addition the air is cooled with a Water Cooled Air Cooler that helps to reduce emissions. The aftertreatment has a underfloor SCR system that reduces NOx to negligible values and a DOC and DPF close coupled to the engine for the particulate Matter reduction. Both these aftertreatment systems makes the vehicle compliant to the latest RDE Euro 6/D standards. Depreciation is a tougher one to finger but the fact that Wranglers tend to have very long lifespans between major revisions helps prop up residual values significantly.

Jeep has had to walk a very precarious tightrope in its improvements to the Wrangler. On the one hand, they needed to make it smarter and more relevant to the majority of SUV buyers, while at the same time not alienating those customers who loved the model's rough, tough go-anywhere ability. After looking at this MK4 'JL'-series model, we think many brand loyalists will feel that the company has succeeded in achieving this. Although still not a good choice if your SUV will have a heavy diet of on-road work, this Jeep is now a more capable all-rounder, more comfortable and with a much improved interior. But it's still very much a Wrangler. And that's all that really matters.

Initial rental:
Total cost:
Finance Type ()
Business
Personal
Contract length (months)
24
36
48
Initial rental (months)
1
3
6
9
12
Annual mileage
5000 miles per annum
Vehicle maintenance
Yes
No
No - I understand I will be responsible for all scheduled servicing, maintenance & tyres of my vehicle
Yes - I would like my vehicle maintained and serviced throughout the term of the contract